With the opening weekend of the 2021-2022 season now in the books, one thing is clear – the competition for division supremacy and tournament qualification is going to be fierce. While nothing is decided, there are plenty of talking points coming out of the first round of games as the league season kicks into gear.

In arguably the marquee matchup of the weekend, the Tommies and Badgers fought tooth and nail across 120 minutes with the teams sharing the spoils. Both teams came in on the back of strong non-conference starts, but found themselves evenly matched across the two game series. Importantly, though, the Tommies did emerge ahead in one key metric – head-to-head goal differential, which will be the deciding tiebreaker should the teams finish even in the Southeast Division standings come February.

Amazingly, the Blugolds have not lost a regular season game dating back almost two years to the day – a loss to Gustavus Adolphus on Oct. 19, 2019. That significant undefeated streak continued agains the Warriors, who battled hard but were unable to overcome UWEC at home. With the two wins, the Blugolds sit tied first place – but with plenty of time for others, including Winona State, to make a push up the standings.

In their first games against new division counterpart Minnesota-Duluth, Minnesota State-Mankato made a big statement with two road wins. In both games, the early moments were tightly contested, but the Mavericks were able to sustain pressure and pull away in the second half for the win. At 2-0-0, the Mavs share a spot at the top of the division table while the Bulldogs will host fellow winless opponents Winona State in a big matchup this coming weekend.

After splitting their first series with NDSU, the Huskies made a huge statement with back-to-back road wins over the Fighting Hawks. The high scoring affairs incredibly ended with the same final score of 8-4. With two wins, SCSU took over solo first in the Northwest with a strong positive goal differential. For North Dakota, their first two competitive games of the season may serve as important experience with a huge in-state series looming against North Dakota State.

After an opening night tie, Minnesota found a second gear in the Sunday matinee to earn a 5-2 win over North Dakota State and claim 3 of 4 points on the weekend – putting them in second place in the Northwest after one round of play. For their part, NDSU bounced back from their previous game – a 9-1 trouncing at the hands of non-conference Jamestown – to show their intent to push for a division title this year. Claiming points on the road to a title rival like Minnesota is vital, so both teams should leave this series with good vibes for their upcoming matchups.

The scheduled Northwest series between St. John’s and Minnesota-Crookston was cancelled due to COVID protocols; rescheduled game dates are TBD.

In non-conference action, Bethel University dropped a one-off game against Waldorf (D1) by a score of 5-2. 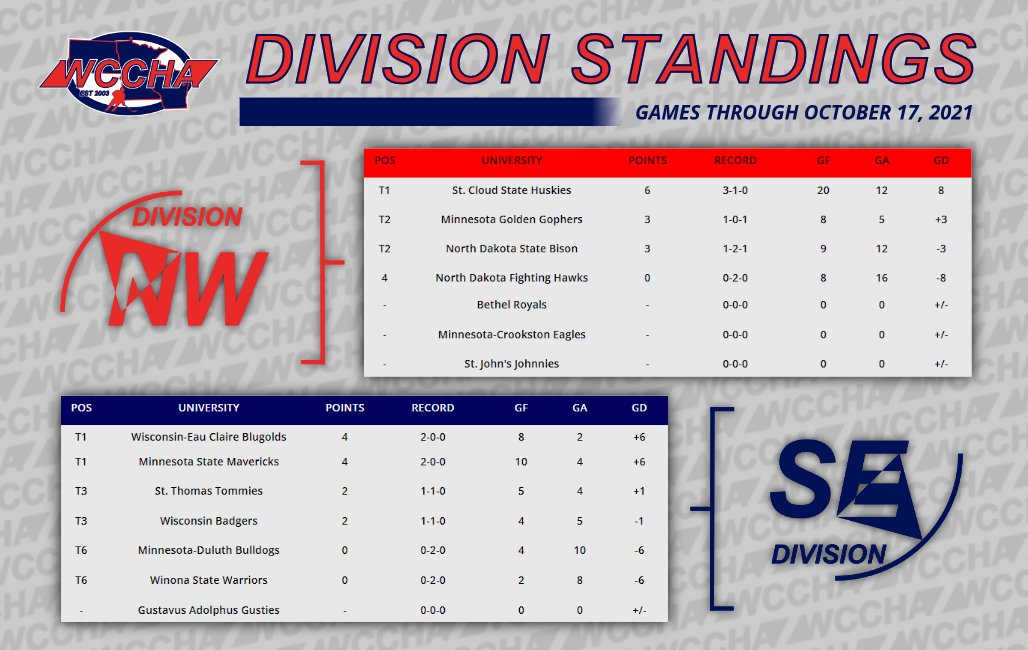